with 2 magazines and user guide.

EAA Girsan MC P35 pistol in BLACK, FDE, TWO TONE available in stock and at a cheaper price for sale. Made with serious respect for the original Browning® Hi-Power™ pistol design, EAA’s MC P35 pays homage to one of the most widely used military handguns in the world, with its classic styling. Built on a steel frame and sliding in a black matte finish, the MC P35 boasts a 15+1 capacity in a staggered column magazine. Originally designed as a military pistol, the Hi-Power™ necessitated extreme accuracy and the Girsan MC P35 does not disappoint. The short-recoil 9mm, 4.625” barrel, along with the slide, allows for quick second shot resets, getting the shooter on target faster. The rear sight is a windage drift adjustable sight and the front is a dovetail sight. The traditional slim trigger allows for a short trigger reset and is accessible even while wearing gloves and the serrated ring hammer provides a positive grip while cocking. Enhanced external controls include external extractor, ambidextrous safety, and magazine disconnect safety.  The EAA Girsan MCP35 delivers great performance and accuracy in a lightweight and reliable handgun design. It comes chambered in 9mm with a 4.87″ barrel. Features include adjustable sights, an ambidextrous safety, and a 15+1 round magazine.

The single-action trigger on the P35 is, well, about on par for a military contract BHP of years past and is gritty, mushy, and breaks at an average of 7.5 pounds. The magazine safety doesn’t help with that. This can probably be tweaked by someone who knows what they are doing and can always be upgraded with drop-in trigger pull sets that are commonly available. 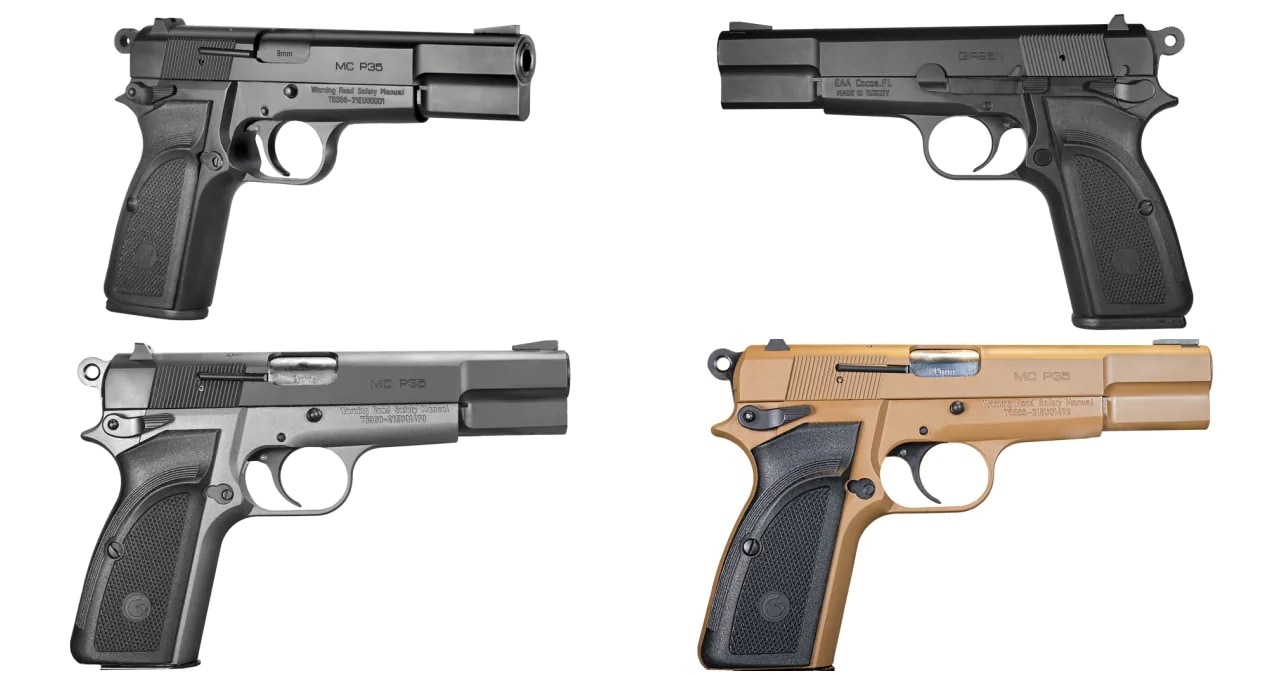 Judging from the feedback we have seen on past articles on the P35, there is a palpable interest in an affordable new Hi-Power-style pistol on the market. After all, with the BHP itself out of production, the MSRP on the EAA Girsan version is $528, which is about a third the price of a vintage gun or about $170 less than the published MSRP of the newly introduced American-made SA-35 announced by Springfield Armory.

You could say it would be the latest in a series of clones that goes back some 40 years, back to a time when I could vouch that folks wanted a nice Belgian/Portuguese BHP, but the sticker price built a fence around the gun. This led to the obvious supply and demand answer that someone would build it at a lower price point to give the public a “people’s champ” option.

The Hungarian-made FEG P9M/PJK-9HP was a great bargain at the time, able to be had for about $200 if you shopped around. Sadly, the prices rose on these throughout the late 1990s even though the finish got worse, switching from the original deep blue to a more BBQ grill black matte. Then, in the early 2000s importation ended as FEG stopped making guns altogether, moving into HVAC systems and other household goods. Both Dan Wesson (2003-2004) and Magnum Research (2005-2006) took a brief stab at making a Hi-Power clone, branded by KBI – the importer of the old FEG guns – as the Charles Daly Field HP, but that too soon disappeared.

In 2018, an importer called LKCI started bringing in the Regent BR9 made by Tisas in Turkey. That was patterned after the Hi-Power, but they never really appeared in quantity.

So long as it performs adequately, is available on the shelves, and remains at an obtainable price, the Girsan MC P35 could find itself popular.